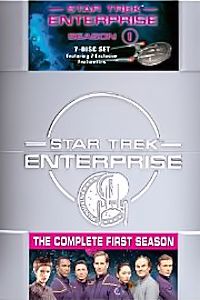 Archer learns from the Suliban Sarin that Klaang was carrying a message to the Klingons to prevent civil war in the Klingon Empire. She urges to find him. Archer, Trip, T’Pol and Hoshi have been captured, but it turns out this group of Sulibans is lead by Sarin, the person Klaang last spoke to before crash landing on earth. She tells Klaang was carrying an important message to Kronos that must prevent a breakout of civil war in the Klingon Empire. But another group of Suliban attack and before dying she urges Archer to find Klaang. The four humans escape from the planet, but Archer gets wounded in the leg. He loses consciousness and T’Pol announces she is taking command of Enterprise. To everybody’s surprise she modifies the sensors so that Enterprise can track the ship that captured Klaang.